In 1640, Dutch settlers purchased the area now known as Sunset Park from the Canarsee Indians. Up through the first quarter of the 1800s, the area was primarily farmland. Streets grids were laid out as Irish, Polish and Scandinavian immigrants moved into the area in the 1830s, causing rapid growth. Portions of the community came to be known as "Little Norway" and “Finn Town”.

In the late 1800s and early 1900s, Sunset Park's population soared along with the booming Brooklyn waterfront and the Bush Terminal Industrial Park, spurring the construction of vast numbers of brownstone, limestone, brick and wood rowhouses.

During the 1940s and 50s, as the waterfront declined, so did the neighborhood. The decline accelerated with the construction of the raised Gowanus Parkway, cutting off much of the neighborhood from the harbor. As in much of Brooklyn, the loss of jobs combined with social forces to create massive "white flight" to the suburbs.

Starting in the late 60s, state and federal aid as well as a wave of new immigrants helped to slowly rebuild the community. Today Sunset Park is listed as one of “New York’s Next Hot Neighborhoods” by The New York Times.

Community Bookstore is about three and a half miles south west of Sunset Park, 18 minutes by car, 17 by bike or 24+ minutes by bus if you combine it with a short walk. If walking is your thing, it should take you about 63 minutes.  We are located at 143 7th Ave. Brooklyn NY. Along the way, take a short detour east and stop in at our Windsor Terrace store, Terrace Books, located at 242 Prospect Park West.

We opened Terrace Books in 2013, and stocked it with a mix of new, collectible and curated used books. But no cat. Community Bookstore’s Tiny, so famous he’s on the cover of a bestseller in Japan, refuses to share the spotlight! 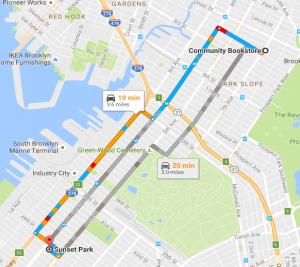