The Dutch acquired the area that is today known as Park Slope from the Lenape people in the first half of the 17th century. In 1776, the area was the site of the first major battle of the Revolutionary War. Ten thousand British soldiers and Hessian mercenaries routed George Washington's much smaller force, but a heroic stand by several hundred "Marylanders" at The Old Stone House, a Park Slope landmark today, gave Washington and the rest of his army to escape.

In the 1850s, a developer named Edwin Litchfield, whose mansion still stands, purchased large sections of farmland in the area and, over the next 10 years, sold it off to developers. By the late, 1870s urban sprawl had transformed the area into a streetcar suburb complete with mansions competing for the magnificent views of the newly opened Prospect Park. The census 0f 1890 showed Park Slope to be the richest community in the United States. At the same time, a large working class area grew downhill from the park, divided into large Italian and Irish enclaves.

Many wealthy and middle-class families fled to the suburbs in the 1950s and 60s, with Latino and African American families taking their place. At the same time, however, the neighborhood's iconic brownstones were drawing a new influx of young people, including large numbers of teachers and artists, as well as the young couple who founded Community Bookstore.

In 1973 a landmark district was created to preserve historic buildings in the area. This landmark designation accelerated gentrification, driving out many of the original working class families. Today, Park Slope, while still diverse, is also one of the wealthiest and most desirable neighborhoods in New York City.

Community Bookstore is in the heart of Park Slope. We are just a few minutes away by car, bike or bus. Probably the fastest way to get to us is take a short walk .  We are located at 143 7th Ave. Brooklyn, NY.

In 2013, we took over another neighborhood bookshop, renamed it Terrace Books, and stocked it with a mix of new, collectible and curated used books. But no cat. Community Bookstore’s Tiny, so famous he’s on the cover of a bestseller in Japan, refuses to share the spotlight! 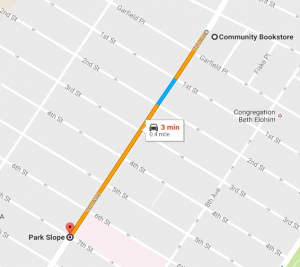