Battle Hill in Green-wood Cemetery is the highest point in Brooklyn at 200 feet above sea level. During the American Revolutionary War, it was the site of important action during the Battle of Brooklyn on August 27, 1776.

From the 19th to mid 20th century, the economy of Greenwood was dominated by the Brooklyn waterfront. In 1838, Green-wood Cemetery opened to the public. The cemetery covers over 478 acres and currently accommodates approximately 560,000 graves. It is rumored that New York City built Greenwood to accommodate the overflow of rotting corpses in the cemeteries of small NYC chapels & churches that could not keep up with the death rate of the city’s growing population.

Today Greenwood Heights, like many areas of Brooklyn, is experiencing massive changes in the real estate market. A 2005 rezoning brought luxury condos to an area that had previously only accommodated one and two family homes. As real estate values and community gentrification gains momentum, turn-of-the-century homes are being gutted and renovated at an unprecedented rate.

Community Bookstore is about 2.5 miles north of Greenwood Heights Brooklyn. 13 minutes by car, 19 by bike or 30 minutes by bus if you combine it with a short walk. If power walking is your thing, we’re  just 45 minutes away.  We are located at 143 7th Ave. Brooklyn NY

In 2013, we took over a neighborhood bookshop in nearby Windsor Terrace, renamed it Terrace Books, and stocked it with a mix of new, collectible and curated used books. But no cat. Community Bookstore’s Tiny, so famous he’s on the cover of a bestseller in Japan, refuses to share the spotlight! 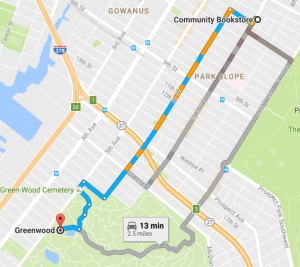