Founded in 1651 as “Midwout” by Dutch colonists, the town surrendered to the English in 1664 and became the county seat of Kings County. It was considered the center of the community now known as Brooklyn.

Skirmishes took place in and around Flatbush during the Battle of Long Island in 1776. Dutch settlers in the area were prominent in the slave trade. At one time, slaves made up one third of the population of Kings County, giving it the highest concentration of slaves north of Maryland.

In the 1920s, the subway system connected Flatbush to the surrounding communities. The area became a working class neighborhood populated mostly by Irish-Americans, Jews and Italian-Americans. During the 70s and 80s, there was a demographic shift as Caribbean residents moved in. In 2016 Flatbush was one of four neighborhoods featured in The New York Times about "New York’s Next Hot Neighborhoods".

Community Bookstore is about three miles north of Flatbush Brooklyn. 30 minutes by car, 19 by bike or 23 minutes by bus if you combine it with a short walk. If cardio is your thing have we got a great walk for you. We’re just  just 57 minutes away if you go through Prospect Park.  We are located at 143 7th Ave. Brooklyn NY

In 2013, we took over another neighborhood bookshop, renamed it Terrace Books, and stocked it with a mix of new, collectible and curated used books. But no cat. Community Bookstore’s Tiny, so famous he’s on the cover of a bestseller in Japan, refuses to share the spotlight!

Directions from Flatbush to Community Bookstore 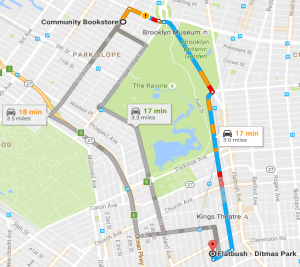